PSISTORM Gaming is proud to show support to StarCraft 2 in the Philippines.  Hence our inaugural season of PSISTORM StarCraft League (PSL) will be for Filipino players.  We are creating a tournament league modeled after the prestigious GSL.  We all have been fans of Artosis and Tasteless casting the biggest and longest-running StarCraft 2 tournament in the world, with the best players in “Code S”.

We are basing our tournament style after GSL, with qualifiers to a round of 32.

PSL players will then be broadcasted competing in a similar format.

Eligibility (any of the following):
• Currently residing in the Philippines
• Philippine citizenship
• Pure Filipino or married to one
• One of your parents is any of the above

Qualifiers:
• All participants will play a Bo3 with their opponent (randomly seeded)
• A maximum of 32 qualified players shall move on to the Group Stage.
• Matches in the Qualifiers will not be broadcasted online.

Group Stage:
• 32 players in 8 groups of 4 players each, played in a Dual Tournament format.
• All matches are Bo3.
• Top 2 players of each group advance to the Playoffs.

Playoffs:
• 8 players in the single-elimination bracket.
• All matches are Bo5. Grand Finals is Bo7
• Finals are Bo7 with a 1-0 lead for the player coming from the Winners’ Bracket.

List of registered players so far
Round of 32 players

all dates/times are US Eastern – please convert to your region 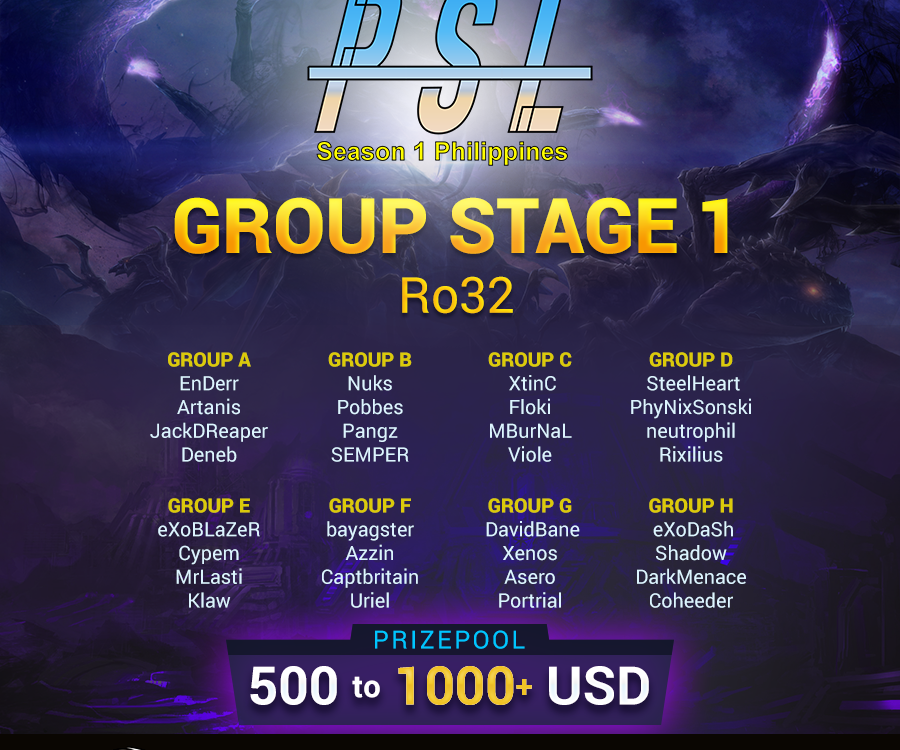